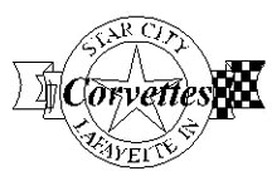 Click on logo to go to the club's Web site
"Star City Corvettes" derives its name from the legend that, shortly after William Digby founded the town of Lafayette, Indiana, Lafayette became the principle trade city on the Wabash River. The Wabash & Erie Canal also terminated close to Lafayette. At this time Lafayette was "The West" and since Cincinnati, Ohio was known as the "Queen City of the West" Lafayette became known as the "Star City of the West".
The name remained associated with Lafayette, Indiana through the early 1970's.