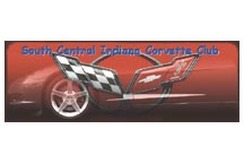 _The South Central Indiana Corvette Club was started in 1992 by four men who loved The Great American Sports Car - The Corvette! These charter members of the club decided to have a car show. At the first car show there were 4 Corvettes, 4 men, and one boom box with two speakers. While enjoying their show they discussed how to bring in other members who loved the Corvette as much as they. Each year the club grew more than the year before.
By 1999 the club had established a partnership with a charity.  The proceeds from that show, a few hundred dollars, were donated to The Ronald McDonald House in Indianapolis.  Our 23rd Annual Car Show in August 2015 was another success.  We had around 50 cars participate from all over the state, and outside the state as well.  The proceeds from our 2015 car show were near $5,000 for the Ronald McDonald House.  Our clubs grand total donation to date is over $90,000 for Ronald McDonald House.